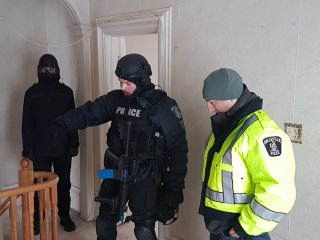 As one of the support units for the police service, the Emergency Response Team is there to respond to high priority calls throughout the city of Belleville. Trained to deal with barricaded persons and more, the 13 members of the ERT work alongside negotiators to carry out warrants involving drugs and weaponry.

When the drug unit conducts an investigation into someone having drugs or guns and a warrant is sought and granted, that’s when the ERT is called in to assist in the search depending on level of risk.

While drug or gun warrants are a high priority in Belleville, the team is also responsible for missing person searches and have been trained on using special GPS methods, such as grid searches.

The ERT responds to an average of 25 to 40 calls per year.  They dedicate 20 days a year to train in stressful situations and practice various scenarios they might encounter on the job.

To qualify  to be a member of the ERT, candidates must go through a task specific fitness test which tests their capabilities when responding to a call. The test includes scaling six-foot walls, carrying the heaviest person on the team and many other physical tests while wearing a mask that restricts breathing.

Sgt. Martin Charbonneau, who has been on the response team for 11 years, says building the confidence to trust that his comrades will react the correct way takes time.

“Your actions have to be very deliberate when you are on the team, so when you’re training  together you eventually build that trust. Should things go wrong on a response, you know that team members will react appropriately and that could be the difference between you getting hurt or not” says Sgt. Charbonneau.

While the ERT are a special unit in the force, Sgt. Charbonneau wanted to make it clear that the team is just one piece of the puzzle to make Belleville the safest community in Ontario. “We’re all members of this community as well and we all have that common goal of making the city safe for our kids to grow up in and in turn for the citizens of Belleville as well.”