Back to News
November 6, 2020Warning - this news article expired on 2020-12-09. Information may no longer be accurate or applicable

Belleville Police received a report of a suspicious adult male on a bicycle speaking to children on the property at Our Lady of Fatima Catholic School.  It appeared that the suspicious male may have been looking for something.  Police report that when adults were made aware of the suspicious male, the suspect took off on a bicycle down Graham St.  Police searched the area but were unable to locate the man.

The suspicious man was described as a white adult male wearing green pants, a purple sweater, black ball cap and carrying a denim backpack.  The bicycle the suspect was riding was burgundy in colour.  Belleville Police would like to identify the suspicious man and are asking for the publics assistance if they recognize or see the suspect. 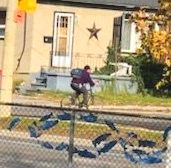 Belleville, Ontario- The Belleville Police Service would like to clarify the suspicious person incident from Our Lady of Fatima Catholic School on November 5th, 2020. Police have spoken with school officials and have confirmed that at no time did the suspicious person speak to, or have any contact with any students.

Belleville Police took possession of an accused male who was arrested earlier by Lanark OPP on outstanding Belleville warrants with charges already before the court.

45-year-old, Raymond Seward of Belleville is charged with Failing to Comply with a Court Order and Failing to Report.  Mr. Seward was held in custody and is scheduled to appear for a Show Cause Hearing scheduled on November 6th, 2020 to answer to the charges.

Belleville Police were dispatched to the corner of Bell Blvd and Sidney St regarding a suspicious male possibly in the possession of drugs.  Officers located the male and found him to be in possession of crystal meth.

The accused, 28-year-old, David Reid of Belleville was charged with one count of Possession of a Scheduled 1 Substance.  Mr. Reid is scheduled to attend court on November 30th, 2020 to answer to the charge.